The plants in our vegetable garden are filling in nicely...some with a little trial and tribulation! 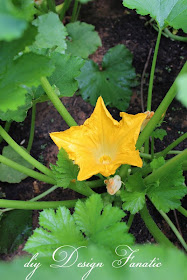 Shown here is what we call our South Garden. Mr. Fanatic gets a kick out of me calling it that because our garden really isn't that big.  Veggies in our terraced raised beds are doing pretty well, with a couple of exceptions. But, I'll get to that later.
I can't tell you how happy I am with the Romaine and Head lettuce we planted. The lettuce I planted last year was that fancy, high falutin stuff and I didn't like it.
Give me Romaine and Iceberg because I love the crunch! 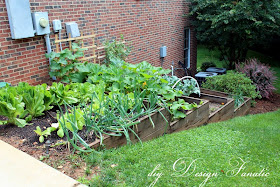 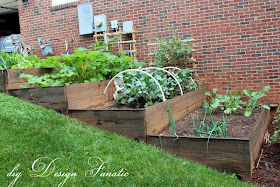 The Snap Peas have been producing wonderful pods for the last few weeks. We had them in stir fry last night and they were tasty. 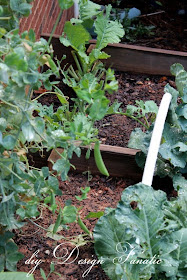 Closeup of an itty bitty Cucumber. This is the first time I've grown them. 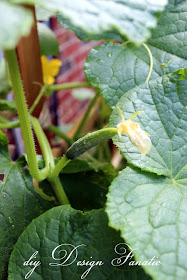 There are a couple of larger cucumbers growing on the vines, as well. 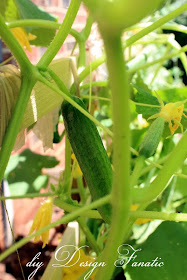 The Cucumber plants are growing nicely on the trellis. 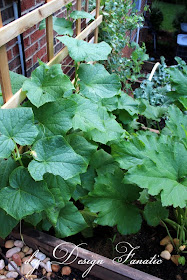 I'm getting excited about the Zucchini. Little Zucchini are already starting to form. See the one just below the large flower? 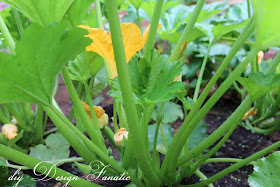 Here's how the North Garden looks now.
No, we don't have a covered wagon in our raised bed. lol. We had some trouble with those little white butterflies I thought were cute... 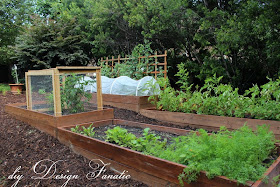 ...until they laid caterpillar eggs, which became caterpillars, that ate holes in my Broccoli leaves. After uploading this photo I realized there was one of those nasty critters on one of the leaves. Do you see him? 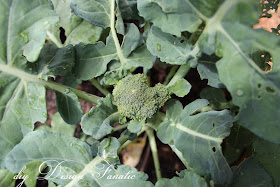 I went right outside after seeing the photo to get him.
Got him! 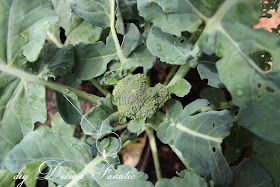 This broccoli head is getting big. 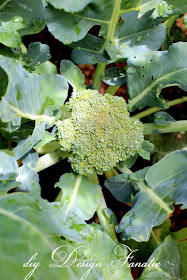 Anyway, the hoops covered with the white fabric over the Broccoli and Cabbage keep the butterflies from laying eggs on the leaves. I feel like I'm playing hide and go seek when the cover is put on. My cat Buddy loves to sleep in the bed when the cover is on. He's too cute. Regarding getting rid of the infestation of caterpillars: I also sprayed them with BT, (bacillus thuringiensis) which is an organic caterpillar killer
: ) Took care of most of them, but I still go out every day and check the leaves.
Mr. Fanatic made the cage for the tomatoes last week because last year some critter ate every single tomato off one of our tomato plants that was planted on this side of the yard.
That's not happening this year! 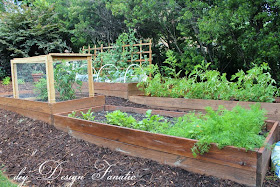 Can anyone explain this to me???
The big plant on the left and the little one on the right are both Summer Squash and were both planted from seed at the same time. Looks like a commercial for Miracle Grow, but that's not the case. Both plants were treated exactly the same. Can't figure this one out. 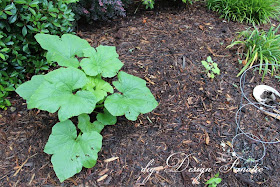 The first row of Potatoes  I planted are dying and falling over.
This is a GOOD thing.
That means the potatoes are almost ready to dig up. Don't tell anyone, but I've already stolen a few and they were tasty. Yukon Gold potatoes are our favorite. 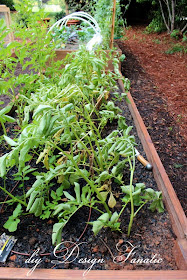 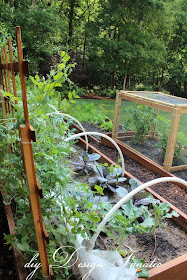 Here's the view of our North Garden from our deck. Herbs are growing to the left of the raised beds. 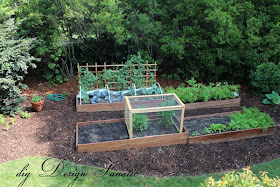 It's pretty amazing that only a few months ago our raised beds looked like this: 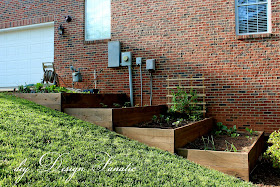 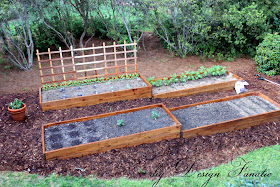 Hope you enjoyed the tour of our Vegetable Garden.

Leave a comment and let me know you stopped by! If you are not on blogger, leave me your email or some other way of getting in touch with you in the comment. That way I can reply to your question or comment.